For months now, the world has had her eyes set on the 2020 US elections. Sitting President, Donald Trump, faces off his rival, Joe Biden, former Vice President, with the Presidential election scheduled for Tuesday, 3rd November.

Several people are inquisitive about the outcome, and so are the markets. How would the election result affect the crypto market (particularly Bitcoin) and the forex market? That’s what we will discuss in this article.

How Do US Presidents Influence The Markets?

No doubt, US Presidents do influence what goes on in the markets. However, it has less to do with the President as an individual but rather the administration they are in charge of.

The United States Congress usually issues out policies that affect the world economy. Not to mention, only major changes in the economy can have significant effects on the markets.

So for Trump and Biden, they’ll need their party representatives to fill the majority of seats for their policy proposals to be quickly approved.

What Does A Trump Win Mean?

I am not a fan of Bitcoin and other Cryptocurrencies, which are not money, and whose value is highly volatile and based on thin air. Unregulated Crypto Assets can facilitate unlawful behavior, including drug trade and other illegal activity….

In other words, he doesn’t believe Bitcoin and other cryptocurrencies to be money. Also, being decentralized and not regulated makes them ideal for illegal activities like the drug trade and others. However, one can say that this is his personal opinion, not one shared by his administration.

The USD makes up the base or quote currency of top forex pairs, and several times, Trump had affected the markets with his “tweets.” One major instance was when he tweeted about his agreement terms for the US fiscal stimulus package, just in October 2020.

These effects were, however, not long term. The US has one of the largest economies globally, and it’s uncommon for the USD to see a significant drop in value, irrespective of who is in the White House.

Trump has plans to cut the capital gains tax rate to 15% from 20%. Now, this would be beneficial to long-term Bitcoin and forex holders as they get to pay fewer taxes. However, it still doesn’t influence the markets at large.

An area where Bitcoin users in America can be affected is regulation, and to some persons, it is a good effect.  Earlier this year, he gave the Treasury Secretary the order to “Go After Bitcoin.” If Trump intends to make these a reality, he’ll need to have more Republicans fill seats in Congress.

What Does A Biden Win Mean?

Joe Biden has shown no particular interest in neither crypto nor forex markets. “Unaffiliated” would be the right word to describe his stance.

The Democrat presidential candidate was one of the 2020 Bitcoin Twitter scams victims; a scam that affected over 130 high profile Twitter accounts. 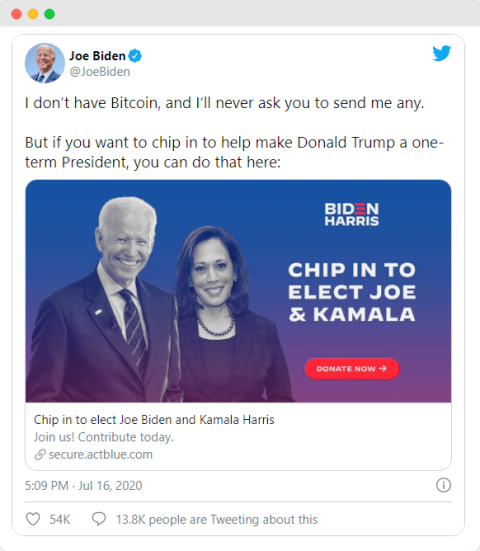 Here, he reveals he, like Trump, has no interest in using Bitcoin. However, he didn’t state that Bitcoin was facilitating illegal transactions. Biden’s cabinet does feature people that have shown particular interest in Bitcoin. This includes Ryan Montoya and Andrew Yang.

In the Forex market, Biden’s presidential campaign has affected currency pairs, particularly the EUR/USD. As mentioned earlier, Trump’s stance on the US fiscal stimulus package affected the USD and helped increase its value.

There’s fear among forex traders and forex brokers with high leverage that the USD would lose these benefits if Biden wins. It is expected that he would impose less aggressive protectionist policies. Nevertheless, we cannot be sure until after Biden – if he wins – takes the oath of office.

One of Trump’s major attacks on Biden has been the issue of tax; it is known that Biden plans tax increases. Although this is targeted at the wealthy, it could mean that long-term forex traders would pay more. Will it affect market activities? Unlikely.

Both Trump and Biden are not particular users of Bitcoin, and neither do they engage in Forex. As a result, you can say neither Trump nor Biden would be keen on making direct policies to affect the market.

However, while Biden remains neutral on the use of bitcoins and forex, Trump has made it known that he’s not a fan. Meanwhile, Biden has a cabinet that has a seemingly positive stance on the use of cryptocurrency.

So, a Biden win could have more positive impacts on the market, but the markets remain prominent either way.

Under the Trump first administration, we witnessed, both the Bitcoin and Forex market have experienced significant growth.

Most significantly, Bitcoin will remain mainstream or likely experience increased demand as interest is on the rise than ever before.