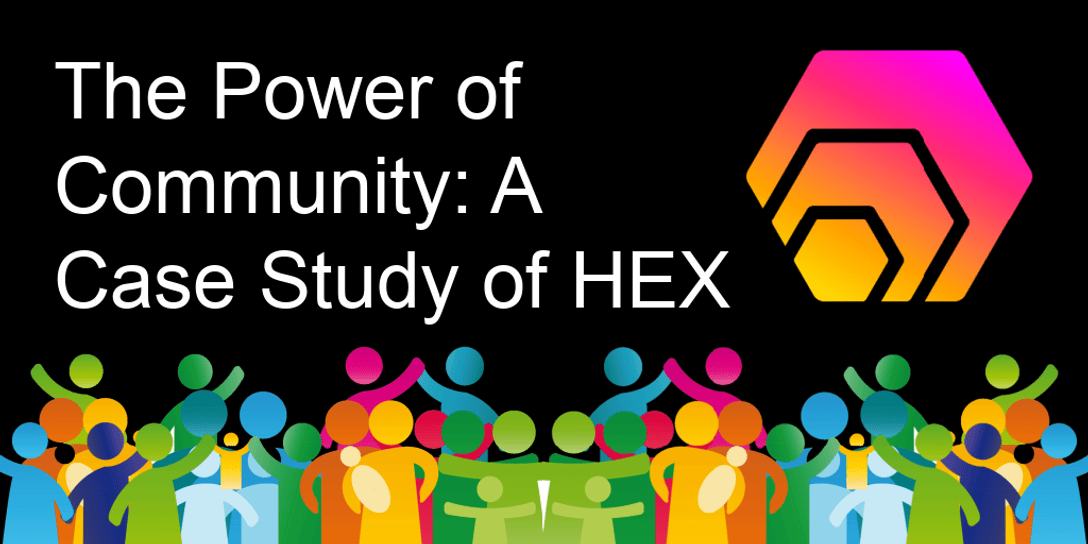 Since November of 2019, just a few weeks prior to the launch of the first certificate of deposit on the blockchain, known as HEX, I have been enjoying the most amazing community in the world of cryptocurrency.  I like to think that I know a little bit about communities and building them. I have been involved in over 30 cryptocurrency projects actively since 2014. Prior to cryptocurrency I was super involved in Google Plus and relished the days of such a close knit community.  In 2016 we thought we found our online home.  We once again had that feeling with the launch of Steemit when my wife and I joined the team. We were welcomed with open arms. We attended the first three Steemfests in Amsterdam, Lisbon, and then Krakow. It was a magical time for our business and for building relationships in crypto. The community quickly showed its flaws and the community feeling lessened over time. It was sad to watch as the whales and witnesses felt the need to cause anxiety and uncertainty in the community. If you did not kiss their rings, you would quickly disappear from relevance.  The flaw I saw in the Steem system was that a few people held the power. These people had the full power of the system and could either reward you with riches or leave you begging for scraps. I Found HEX. When Richard Heart, the founder of HEX, first began talking about launching his own token I didn’t pay attention. In my mind he was a Bitcoin Maximalist. I stopped listening to Bitcoin Maximalists in 2017. My opinion concerning cryptocurrency had changed drastically. I considered myself crypto agnostic, meaning I was open to new possibilities and I did not think Bitcoin was the only solution. Then in early November of 2019 I was catching up on cryptocurrency news on LBRY when I came across a video of Richard talking about the imminent launch of HEX. It was to be the first certificate of deposit on the blockchain. I was intrigued so I watched a few more videos about the subject in the following weeks. The rest is history. I wrote, “Claim Your Free HEX For Bitcoin Holders!” on December 5th just a few short days after the launch of HEX. Thankfully I did because many people claimed their free HEX using Bitcoin and transformed Ethereum into HEX using the AA lobby because of it. People used my link to receive a 10% bonus in HEX. I also FOMOed big on day 1 of the AA lobby and bought HEX every day for the first week. Then sadly I forgot about HEX until the illegal lockdown of my family, here in Panama, beginning on March 20th which continues to this day. Having only 6 hours a week to legally leave our house means we have a ton of time on our hands. The Rise of The HEX Community. One night in late March I came across a Tweet by Hexologist. He was hosting a nightly HEX news livestream on Youtube. My family and I loved the show and have been watching every night since! This guy has what it takes to cultivate an energetic following and he had me hooked. A few weeks later Hexologist held a 24 livestream on Youtube. I was honored to be one of the guests. In my opinion it was that livestream that really brought the community together. We were able to put faces to names and learn a little bit about our fellow community members. Now if you just mention #HEX on Twitter you will receive a flurry of support from the community. The Bitcoin Maximalists accuse the HEX community of being bots. It is quite amusing. The craziest thing that happened throughout this journey is the deletion of the Hexologist channel. He immediately switched to Dlive which is a live streaming platform that supports cryptocurrency. It is now owned by Justin Sun and supports BTT and Tron tips as well as the native lemons which are used for tips. Join Dlive Here and don’t forget to follow me. Richard Heart and The Hexologist Have not Done it Alone. I want to mention some people that have been integral in the rise of HEX. If I miss someone I promise it was not on purpose. I would like to keep the list to about ten people. Good Texture- HEXtradamus https://twitter.com/GoodTexture RG 3- Discourse Syndicate  https://twitter.com/RG3_Pirate Allan Bittner- HEX Meme Lord  https://twitter.com/bittnerallan THE Annette- https://twitter.com/THEAnnette HEX Toys- https://twitter.com/RyGuyPrime HEX to the Yes- https://twitter.com/HEXtotheYES Franklin St. HEX- https://twitter.com/Frank_SaintHex Crypto Nomad- https://twitter.com/NjorogeElsie Firebun- https://twitter.com/realFirebun HEX Jesus- https://twitter.com/LitecoinMoses I know there are so many more but to be respectful of CryptoDailyUK I will keep the list smaller in this article. I will add more when I post elsewhere. You can follow my HEX Nation Twitter list here. What Does the HEX Community Have That Other CryptoCurrency Communities Lack? A passionate founder. A founder that understands marketing. Community members that are building an economy around the token. Financial motivation to expand the community through BTC Free Claims and an AA Bonus. The HEX community supports the efforts of other users on social media. A few passionate content creators to rally HEX nation. A completed product that is 100% decentralized. No fear among the community that the founder could disappear with the funds leaving behind an unfinished project. HEX is here to stay. In the end I feel HEX is a case study in how cryptocurrency projects should try to build their communities. The problem is that most projects are promises, not completed products. This alone boosts the confidence of users.  Post fetched from this article