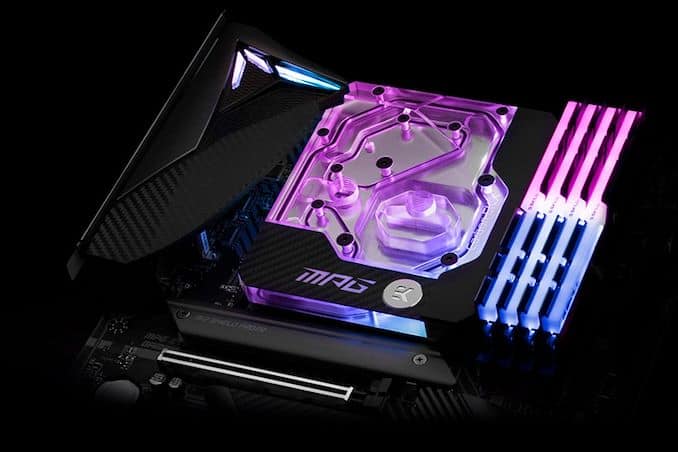 In one of the coolest collaborations of the year so far, MSI and EK Water Blocks have come together to create a new Z490 motherboard, the MSI MPG Z490 Carbon EK X. It is armed with an EKWB CPU block with integrated RGB LEDs which also provides cooling to the power delivery, it includes a 12+1 VRM design, with two PCIe 3.0 x4 M.2 slots, Realtek 2.5 G Ethernet, and an Intel AX201 Wi-Fi 6.

One of the most important aspects to consider when buying Intel’s Comet Lake 10th generation processors is cooling. The Core i9-10900K is a hot CPU, even at stock, and with the performance gained via Intel’s Thermal Velocity Boost, performance cooling is more important than it ever has. There are only a handful of Z490 models that include water blocks, and they aren’t cheap. The ASRock Z490 Aqua is $1100, while the GIGABYTE Z490 Aorus Xtreme WaterForce is $1299. This model is expected to retail for $400.

Enter the MSI MPG Z490 Carbon EK X, which looks to offer the benefits of custom water cooling on Intel’s hot running 10th generation desktop processors, but with a much more wallet-friendly cost. Its most significant selling point is the EKWB custom monoblock which cools both the CPU and the 12+1 phase power delivery. The integrated RGB LEDs in the monoblock can be controlled with MSI’s Mystic Light software. There are three full-length slots which can operate at x16/x0/x+4 or x8/x8/x+4, with two PCIe 3.0 x1 slots too.

The four memory slots can support up to DDR4-4800 with a maximum capacity of up to 128 GB, while two PCIe 3.0 x4 M.2 and six SATA ports make up the board’s storage capability. The design is based on its natural carbon inspired theme with black carbon patterning across the rear panel and sections of the monoblock, as well as the PCIe armor and chipset heatsink. 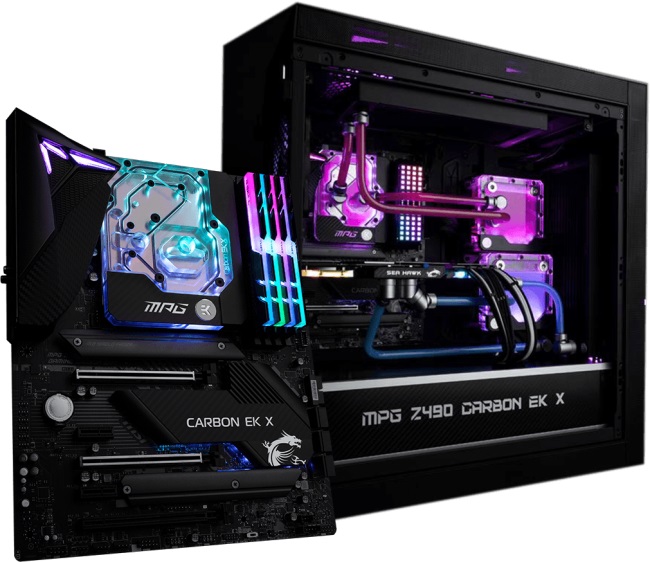 There is also a range of connectors including a USB 3.2 G2 20 Gbps Type-C, four USB 3.2 G2 Type-A, and two USB 2.0 ports on the rear panel. For users looking to use Intel’s UHD integrated graphics, MSI has included a DisplayPort 1.4 and HDMI pair of video outputs, while a PS/2 combo caters to users with legacy peripherals. For networking the Z490 Carbon EK X is using a Realtek RTL8125B 2.5 G Ethernet controller, while an Intel AX201 Wi-Fi 6 adds support for BT 5.1 devices. In regards to internal connectors, MSI includes a single USB 3.2 G2 Type-C header, one USB 3.2 G1 Type-A header which supports two ports, and two USB 2.0 headers which support up to four ports.

The MSI MPG Z490 Carbon EK X has an MSRP of $400, which is very reasonable for all of the board’s features, including the custom EKWB monoblock which cools the processor and power delivery components. So far this is the third Z490 model to include a monoblock by default and costs a third of what GIGABYTE are charging for its flagship Z490 Aorus Xtreme WaterForce model. It’s not as high-end, but the Z490 Carbon EK X offers a more affordable entry point into the custom water cooling market with the Carbon EK X, and it looks good too.