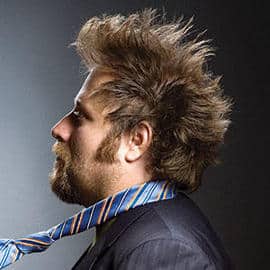 How do entrepreneurs and startup founders position their companies for growth during times of uncertainty and recessionary conditions? To answer this question, Ray Wang, CEO and founder of a Silicon Valley-based advisory firm Constellation Research, and I invited a startup CEO and co-founder that launched his company during the last time we experienced an economic recession, and then grew his business to the 34th fastest growing startup in North America, to our weekly show DisrupTV.

Michael J. Sikorsky is the CEO and co-founder of Robots & Pencils. Michael co-founded his company in 2009 and grew it by 4,800% in the first five years. The 34th fastest-growing startup in North America, Robots & Pencils has become a trusted partner to some of the world’s most innovative companies with over 250 applications used by nearly 80 million people. Sikorsky was named the 50 most influential people in Canada. He was also named by Ernest Young as an entrepreneur of the year. Sikorsky has keynotes at Harvard Business School, Stanford, MIT, and the World Economic Forum.

Here are my 10 takeaways of our discussion with Michael J. Sikorsky, CEO and co-founder of Robots and Pencils:

Wang and I asked Sikorsky about the ethical use of technology, specifically innovation in the artificial intelligence (AI) space and use cases for AI for betterment of society. Sikorsky is incredibly smart and his answers to our questions were superbly rich and thoughtful. I highly encourage you to watch our video conversation with Sikorsky. I did my best to capture 10 key takeaways but the video will give you deeper understanding of Sikorsky’s brilliance and advice.