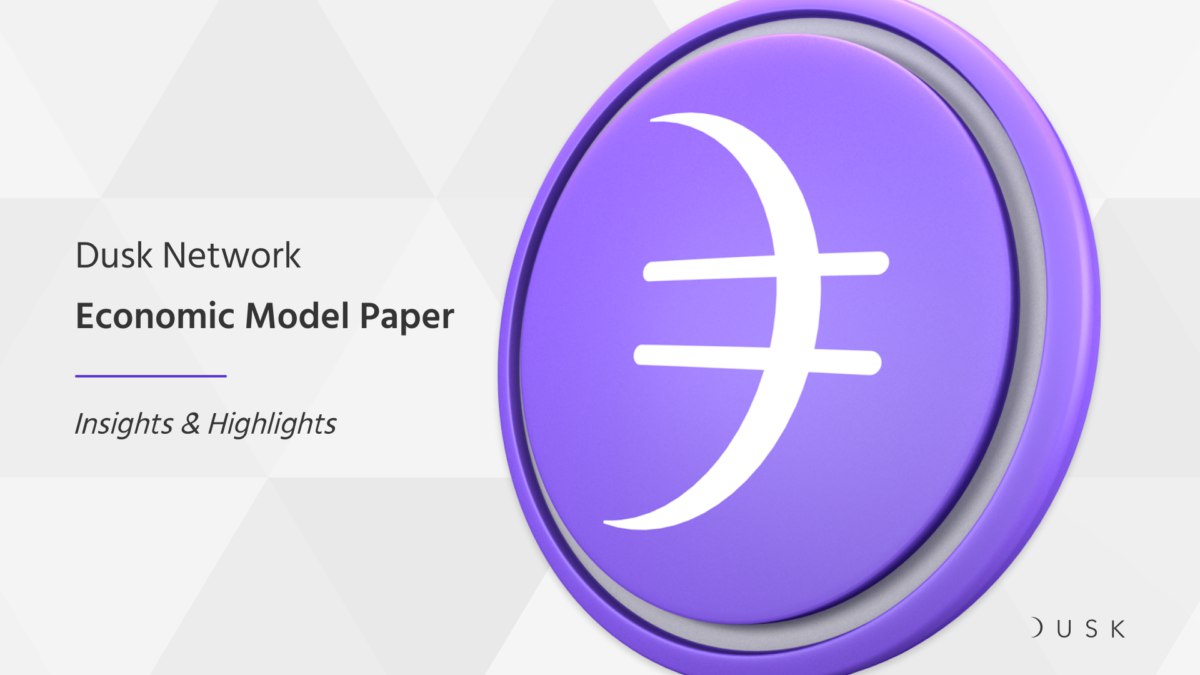 Emanuele Francioni, consensus architect of Dusk Network, has written an updated economic model paper that details how the Dusk team has made significant strides in improving the capability and efficiency of the protocol, as well as lays out the token economics of the Dusk Network infrastructure.

Prospective node runners can stake their DUSK tokens in order to become provisioners, thereby performing an important role in the network’s consensus algorithm.

The Dusk Network’s high performing Succinct Attestation Consensus Mechanism provides clear and final settlement of transactions. This is extremely important for financial use cases, which cannot use the proof-of-work consensus mechanism.

Consensus participants receive the reward of all transaction fees in each block that they validate, together with a newly minted reward of DUSK tokens, the amount of which is regulated by the Token Emission Schedule.

The provisioner that is selected as the block generator for a round receives all the block rewards except for 10% which is reserved for the Community Development Fund.

Provisioners in committees do not directly share in the block rewards, but must remain active in order to have the chance to be selected to generate a block. The higher their stake, the higher is their chance of being selected.

Provisioners need to lock in 1,000 DUSK in order to participate, although there is no ceiling on a maximum stake. This minimum commitment ensures the reliability of the network nodes.

The amount of blocks finalised and added to the blockchain may vary each year. A faster average block time means that consensus participants earn more, as block rewards are issued based on blocks finalised.

Assuming idealised block times, we can use the above data to estimate the expected ROI, based on the total token supply locked by provisioners.

Block rewards incentivise the participation of nodes in the network, which also ensure its security. Over time, it is expected that transaction fees will decrease, leading to a commensurate decrease in the amount of newly minted DUSK tokens.

DUSK is a capped-supply token. It is estimated that the final interval at the 62,500,000th block will be reached in 2050, thereby providing reward incentives for consensus participants for many years to come.

Unlike Bitcoin, which halves the token supply at predetermined intervals, the Dusk Network has smaller reductions, and at more frequent intervals, in order to make the transition smoother at these times.

What provisioners stake on mainnet will be more transparent, allowing for more accurate estimates of return on investment.

Staking on Dusk Network is live. Those who would like to become a provisioner can join through the Dusk dedicated staking portal. The Dusk Network site can be reached at Dusk.Network, and you can take part in conversations on the Dusk Discord server.