15th January : The bitcoin/USD pair stumbled in trading yesterday as reports revealed that 28.15 bitcoins (worth roughly $500,000) were sent to the virtual wallet addresses of leading right-wing organizations and personalities. This follows recent online conversations which have accused Bitcoin of being an illicit tool for ‘extremist financing’.

The transfer was made on December 8 to 22 different wallets from a French crypto exchange, almost a month before enraged supporters of the current US President stormed the Capitol, leading to five deaths and significant amounts of damage.

The news flooded Twitter, especially among hardcore critics of Bitcoin, with experts highlighting warning signs for the digital currency. Vinay Gupta, CEO of Mattereum and a key figure in Ethereum’s early development, conveyed his concerns regarding bitcoin’s illicit use. 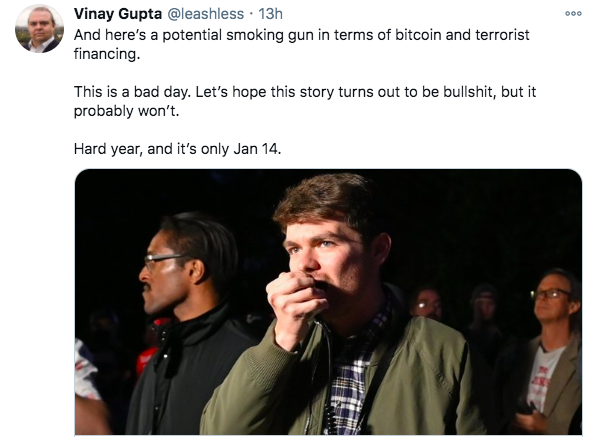 These latest findings follow on just days after mass media coverage relating to bitcoin’s anonymous system and its lack of regulation, and has generated a tremendous amount of fervor from both proponents and critics alike. It is important to note, however, that other cryptocurrencies have not gone unscathed, with privacy coins including Zcash and DASH also coming under intense scrutiny for their private and anonymous benefits.

This latest incident joins the long list of premeditated criminal activities connected to bitcoin. In August 2020, the US Department of Justice dismantled three cyber-enabled terrorist financing campaigns which included ISIS and Al-Qaeda, and was the government’s biggest-ever seizure of terrorism related cryptocurrency activity.

Chainanalysis, the world’s leading Blockchain analysis company, and the company responsible for this latest investigation, identified the source of the donations as an anonymous wallet they have since labeled as an “Extremist Legacy Wallet.” The analysis firm went on to identify American far-right political commentator, Nick Fuentes, as being the biggest donation recipient with 13.5 BTC being sent to his wallet; around $250,000 at the time of Chainanalysis’ blogpost.

At this current moment of writing, the conversation online is still going strong, and has erupted into a back and forth squabble, with leading bitcoin advocates proliferating common anti-bank and fiat sentiments, whilst ardent bitcoin critics and rivals are continuing to drive the nail home by reiterating the cryptocurrency’s flaws.

Regardless of one’s take of the situation, one thing is for sure – this incident has opened up an important discussion surrounding whether bitcoin requires more regulation and monitoring, and this will not die down anytime soon.

Disclaimer: This article is provided for informational purposes only. It is not offered or intended to be used as legal, tax, investment, financial, or other investment advice.